It’s good to see a film like this, an all too rare event. A simmering drama from South Korea that slowly and inexorably turns the screws as a young man searches for clues about a young woman who has disappeared.

Maestro of psychological thrillers, Alfred Hitchcock built a career on stories like this, with characters who didn’t know what was going on, who were trapped and compelled to unravel the mystery, if they could. The classic Vertigo in which Kim Novak’s blonde vamp leads James Stewart’s retired detective astray is for many the acme of Hitch’s tales of disorientation and obsession.

As with Vertigo, the audience for Burning will need to be patient and settle to its unhurried rhythms while being fed information, possibly inconclusive and even contradictory, one pellet at a time. If film goers entrust themselves to Chang-dong Lee’s direction, slow paced and nuanced, the rewards will be worth the wait. 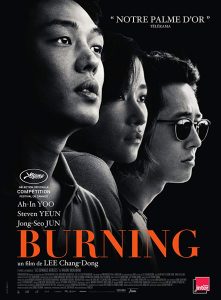 Drawn from a short story by the master Japanese novelist, Haruki Murakami, it is based a screenplay the director developed with co-writer Jungmi Oh.

Burning is framed by a search for a story. Aspiring writer Lee Jong-su (Yoo Ah-in) has completed his studies and really wants to find a good story to launch his career. While doing his rounds as a deliveryman, he bumps into a Shin Hae-mi (Jong-seo Jun), who he knew at school but seems to have forgotten. She seems rather flaky, but it seems she has not, however, forgotten him.

There is a little time to get acquainted before she leaves for a holiday in Africa. Jong-su agrees to drop in to her apartment to feed her cat. However, it never makes an appearance and Hae-mi returns with another man in tow, Ben (Steven Yeun), a suave and cultivated Porsche-driver whom she met at the airport in Nairobi.

an aching sense of interpersonal, inter-generational and social alienation readers of Murakami’s writing will recognise

Ben is an enigma. There is backstory to Jong-su, that includes a violent father and an isolated, dilapidated home in farmland on the outskirts of Paju, but there is little to learn about Ben. Except that for him work is ‘play’. Why is he, rich and idle, spending time with Hae-mi, a shopgirl so unlike the people he consorts with? Does he amuse himself with girls like her then move on?

Before she went to Africa in search of the meaning of life, Hae-mi had a job gyrating in skimpy clothes at a store to lure customers inside. Ben observes her isolation, but for all three young people there is an aching sense of interpersonal, inter-generational and social alienation that readers of Murakami’s writing will recognise.

Sense of place is strong, from Hae-mi’s tiny apartment, to Ben’s affluent home to the rundown farm where Jong-su lives. The backstreets of the city and the byways of the country take on a malevolence as Jong-su stalks Ben into the countryside and the old industrial areas beyond. 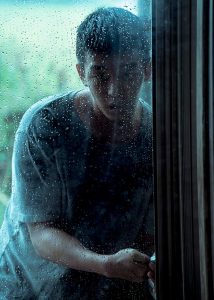 With Hae-mi disappeared and with Jong-su having little to lay claim to, Burning seems to be asking why the idle rich can strip ordinary working people of all they own.

Is a Jong-su’s obsession reality or fiction? On more than one occasion, a teasing cut suggests the aspiring writer is waking from a fevered dream.

While the truth is elusive in this atmospheric mystery drama, there is no doubt at all about the very visceral way that it all ends.