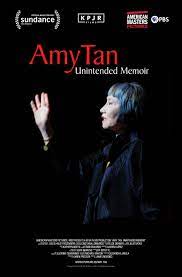 It’s surprising that the Chinese community that has made America home is under-represented on US cinema screens. There are the very notable novels, and there have been a few, but the big screen event that we saw with Crazy Rich Asians is rare. It is hardly any different in Australia.

So, a documentary like this is welcome and it is overdue. The first book by popular, influential novelist Amy Tan was The Joy Luck Club, published in 1989. It was nominated for many awards, broke New York Times bestseller records and was adapted to film four years later.

Directed by James Redford, this doco traces the life that Tan’s family left behind in China before emigrating to the US, and the highs and lows along the way as they adapted to their very different new home. As Tan says, her backstory is the past that began before her birth.

Anchored by her lively, extrovert personality, it is the final work by the late son of Robert Redford. James was still working on this project when he sadly died last year. This adds a poignant postscript.

After The Joy Luck Club there were five more novels loosely based on the life of her family (with catchy titles like The Bonesetter’s Daughter and Saving Fish from Drowning), short stories, children’s books and non-fiction. Tan’s most recent work of non-fiction, Where the Past Begins: A Writer’s Memoir, could be a companion piece to this film, which will be of special interest to writers and those who aspire to be.

It is in itself interesting that this is a documentary. Tan’s novel writing has presented her life and that of her family in fiction, where she believes we find the deepest representation of truth.

The novelist Tan began her career in business writing, even dabbled in astrology columns

She began her career in business writing, and even dabbled in inventive contributions for an astrology column. Eventually she turned to novels, with writing that came to reveal the relationship that had had the most impact on her, her relationship with her mother, Daisy Li.

Growing up, Amy had felt compelled to succeed. Her mother, a ‘spitfire’ by some accounts, had determined that her middle child would become a doctor during the week, and a concert pianist on the weekend. And there were other pressures on young Amy, like Daisy’s suicidal tendencies and the tragedy that struck the family when Amy’s father, an engineer and Baptist minister, and her elder brother both suddenly died of natural causes in the late 1960s.

In subsequent years, Amy learnt that her grandmother was a concubine and had committed suicide, and that Daisy had left her first husband and three daughters behind in China when she escaped to California in 1949. As Tan acknowledges, she felt ‘tethered’ to these family stories, and began writing to herself during her mother’s suicidal years.

A documentary account that is interesting but not searching, and turns a bit repetitive

Tan’s story is told through a variety of media, including interviews with the subject, her mother, her lifelong best friend and her surviving sibling. Tan’s husband of nearly 50 years, Lou DeMattei, has something to say as well. It was one of the couple’s life decisions that they wouldn’t have children.

There is simple animation, black and white photographs of the family in Shanghai and the early years in California, home movies that include footage of the actual ‘joy luck’ investment club that met over mahjong, together with clips from Wayne Wang’s film, The Joy Luck Club (released in 1993) itself.

Fellow author, the Chilean writer Isabel Allende appears in interview, but why don’t we hear from other Chinese-American writers like, say, Maxine Hong Kingston (The Woman Warrior), a celebrated author also living in California who has also written about the immigrant experience. Amy Tan: Unintended Memoir is rather narrowly based, and tends to be repetitive over its long running time.

Amy’s surviving brother recalls how their parents wanted the children to become perfect Americans. This desire was internalised by a young Amy to the extent that she thought she would die of embarrassment were her mother to show up at school with anything other than cupcakes to share at her birthday morning tea.

We can all perhaps relate to this admission. It seems to be integral to the magic of this slim, stylish woman with a penchant for exciting necklaces, that her work, founded on specific bicultural experience, is so widely relatable.

We’ll End Up Together