Up, up and away to freedom

This is the story of two young families, the Strelzyks and the Wetzels, and a brightly coloured hot air balloon. It’s fantastic but true that in 1979 they used one to escape from East Germany, the former GDR, a daring act that lends new meaning to the image of balloons aloft.

On a September night when conditions were right, a balloon with eight on board, four adults and four children, drifted across the border into Bavaria. It flew at a height above 2,000 metres, high enough to be detected but not identified and out of reach of the guns of border guards. It landed just over the border.

East Germans who left were by definition enemies of the state

Before the Berlin Wall was torn down 30 years ago, the news about people being shot by East German border guards as they tried to escape to the West was a regular occurrence. After this, the revelations about the activities of the Stasi, the Communist regime’s secret police, were just about as bad.

East Germans who took it upon themselves to leave were by definition enemies of the state, to be ‘apprehended or liquidated’. It’s ironic that as she and husband, Peter (Friedrich Mucke), are  on the point of leaving their home in the GDR forever, young wife and mother, Doris Strelzyk (Karoline Schuch), tidies up before she turns to leave. Says she can’t bear to be thought of as a bad housewife once she has gone, but she is destined to be thought of as far, far worse.

The incredible escape story has been made into a film before so I went along thinking it might have already had its day. Disney released Night Crossing with British actor, the late John Hurt, in 1982, just a few years later. But as I watched this German-language drama unfold, I came to think about its relevance differently.

It’s no spoiler to acknowledge that the families made it. That’s well known. It’s the journey that counts here, and knowing the ending doesn’t detract from this well-constructed and tense drama about a highly improbable flight to freedom from a totalitarian regime.

Get out or get arrested, there was no alternative

However, when they realise that the Stasi will discover Doris’ medication in the balloon’s wreckage and eventually be able to trace them, and when Gunter Wetzel (David Kross) and his family realise they have also been compromised, it becomes a matter of urgency. Get out or get arrested. There was no alternative but to start again.

Buying vast quantities of fabric,  some 1,300 metres, is difficult without inviting curiosity. Just how many tents or flags could you claim to be making? Then there’s the challenge of sewing it together and giving it a test run on the quiet somewhere. The odds against getting the work done and kept a secret from small children, nosey neighbours and government spies alike, were huge. 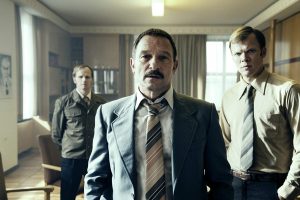 Actor Thomas Kretschmann, (pictured), seen in American action films and on TV in Berlin Station, is the Stasi lieutenant in charge of operations to track down the elusive balloonists. His character’s moral complexity suggests Balloon could have been taken in an even more interesting direction had it played the story less for its action and thrills and more for its political and psychological drama.

Still, it’s a remarkable story about the lengths people will go to, for freedom.

Balloon is directed by Michael Herbig, a well-known German comedian and director/producer, who co-wrote the screenplay with Kit Hopkins and Thilo Roscheisen. It is a gripping drama with solid lead performances about a crazy-brave feat of courage.