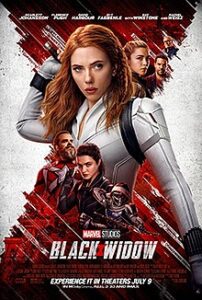 Given that Black Widow is the 24th film in the Marvel Cinematic Universe, a movie about this particular female superhero has taken a while. After all, Scarlett Johansson has been showing us her martial smarts as Black Widow, aka Natasha Romanoff, for the last decade.

It’s said the idea was out there early on. MCU had been thinking about a female superhero blockbuster before Iron Man appeared in 2008 at the start of this incredibly successful franchise of interwoven superhero stories.

Had Black Widow been made earlier, who knows how it might have turned out. Perhaps the New Zealand director of Thor movies, the incorrigible Taika Waititi, would have made it a comedy. Perhaps Kenneth Branagh, who has had a go at directing Thor too, would have added a theatrical flourish.

What we have instead is an Marvel female superhero movie with a female director. Not the very first, but Captain Marvel was only very recent.And the timing is excellent, arriving when gender politics stories are all over the media.

It is pretty well known that when the Black Widow project was finally up and running, Scarlett Johansson, also executive producing, asked for director Cate Shortland to helm. Writer-director Shortland won the Australian Film Institute best film award for Somersault in 2004, which screened in Un Certain Regard at Cannes. She was raised in Canberra.

Johansson had, however, been particularly impressed by Shortland’s marvellous film Lore, set in Germany in the immediate aftermath of WWII. She supported Shortland’s progress from long to short list, and Shortland was chosen over 60 or so other female directors.

How Shortland made the leap from intimate indie drama to superhero blockbuster would be surely be another great story in itself.

And yet, what the director brings has made for some of the best moments in Black Widow, when the visual effects and SFX teams were on their coffee break.

The opening scenes in suburban Ohio are rivetting. Arcing back to when Natasha was a scrappy kid, before she trained at the infamous Red Room to become a KGB agent, a Black Widow. Before she finally defected to S.H.I.E.L.D. 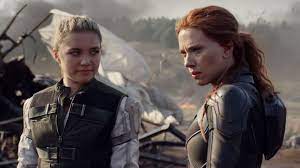 It had been another unremarkable day. She and her kid sister Yelena were gazing at fireflies drifting through the trees in their garden, then settling down to dinner when their dad announced they were leaving town for good.

Within minutes, the family was on the run, with CIA operatives in hot pursuit. Suddenly, the girls’ dad (David Harbour) was firing an automatic weapon and their mum (Rachel Weisz) was in the pilot seat of a small prop plane flying the family to Cuba.

At a bizarre family reunion on a pig farm deep in the Russian woods around 20 years later, Natasha and Yelena Belova (Florence Pugh) discover the true nature of their connection with their ‘parents’, Alexei Shostakov (Harbour), and Milena Vostokoff (Weisz).

The revelations lead to Natasha hunting down the truth about her training as a KGB assassin, and about the international ramifications of the program of which she was part. It’s an evil plot to remove free will, install mind control and rule the world.

As mastermind Dreykov, Ray Winstone slips into the role of uber-villain with ease. Funnily enough, his counterpart across the Atlantic, William Hurt reprising his role as Thaddeus Ross, the US Secretary of State, looks just as creepy.

There is plenty of spectacular action in stunning locations in Norway, Morocco, and Hungary, and CGI delivers a very satisfying end to the evil patriarchy. But, for my money, it’s the interplay between the characters where the real fun lies.

Harbour is diverting as the buffoonish Alexei, as ineffectual as his counterpart Captain America, but the best thing about Black Widow is the edgy relationship between the three women at the heart of the story. Natasha, Yelena and the mysterious Melina are a terrific trio at odds with each other.

The surprise is that Black Widow isn’t quite the lead character’s film. It tends towards her sister Yelena Belova. Both are powerful female protagonists of complexity and contradictions, but Florence Pugh’s Yelena holds her own against Black Widow, and some. She is someone to go back for, for another round.