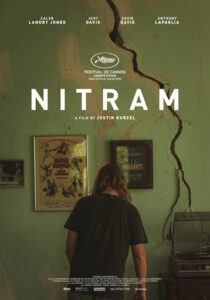 Among the lists recommending the best of this or that out on the net, there are sites listing feature movies about mass murder. It comes as a bit of a shock to realise when researching Nitram, a film about Australia’s most notorious mass killer, that some folks organise their entertainment in this way.

And there’s no shortage of films on the subject. Films like Elephant by Gus Van Sant. It was based on the murders at Columbine, USA, in 1999, that were so horrific until Sandy Hook happened. It is very well made in observational style and it was brave of Van Sant to attempt it. Winning the Palme d’Or for best film that year might have seemed to secure its status, but it isn’t as simple as that.

This new Australian film is about the young man who in 1996 shot and killed 35 people and wounded 23 others one long weekend at Port Arthur, Tasmania. Nitram has also been lauded at Cannes, with a best actor award for American actor Caleb Landry Jones, compelling in the lead role.

It’s a new film from Justin Kurzel, controversial director of Snowtown and True History of the Kelly Gang, who has once again made something technically and aesthetically accomplished, that is also deeply disturbing.

The lead actors here, each inhabiting tricky roles, are excellent. Anthony LaPaglia and Judy Davis as Martin Bryant’s parents are wonderful. Based on intelligent writing by Shaun Grant and the cinematography by Germain McMicking, Nitram would be a powerful drama, even if we weren’t chasing the clues that mark his journey to notoriety, or waiting for the moment when he snaps.

Of course, there is heaps about Bryant online. That he was diagnosed at age 12 as a paranoid schizophrenic, had severe intellectual handicap and personality disorder. But the film Nitram could have been more explicit about these issues, probing Bryant’s mental illness. Early on, there’s an interesting extract of news footage of the real Martin Bryant as a young boy, when he was in hospital after having burnt his hands while letting off firecrackers. Would he stop now? Nope.

As a young adult he was on a Centrelink disability pension and his issues being managed with medication. At home with the olds or abroad seeking friendship and attention, the eponymous Nitram was at a loose end and affectless. Mum and Dad were at cross-purposes over their son, but there was a sister who lived a reasonably normal life, and she is left out of frame.

Life is crushingly ordinary. Mum makes futile effort to chase away the wasps nesting under the roof, Dad spends too much time in front of telly watching Tatts Lotto. It seems like any other place in suburbia. Things at home could be worse, but the lad takes up the offer of a spare room in the rambling, unkempt mansion of a reclusive heiress in her 50s. A fan of light opera and owner of a multitude of pets, Helen is played by the remarkable Essie Davis.

Some important points about Bryant have been left out or elided. Nitram has his Mum over for dinner before the Port Arthur rampage, but there were girlfriends and one of them was in fact with him that night. Rather than the smiling, gloating loon in the video undergoing police questioning in 1996, the perpetrator presents here as remote, dreamy, misunderstood with a streak of menace.

The scenes in the gun shop where fistfuls of $50 notes are exchanged for semi-automatic weapons are a reminder of how easy it must have been. If the filmmakers had also asked why the various social security and medical systems failed to respond to clear warning signals, that would have been even more interesting. We knew so much of this, anyway, didn’t we?

Although there is a disturbing scene where Nitram roughs up his unresponsive father, there is no gun violence on screen, only gunshots heard in the distance or out of frame. The restraint is laudable, but a strong case is not made for the nature of the perpetrator’s mental illness, and it leaves a huge question mark over this strange, sad personal quest for notoriety.

What is wrong with you? asks Dad, in a rare moment of anger and frustration. It’s the question that the film never really answers.

First published in the Canberra Times on 30 October 2021.  Jane’s reviews are also published at Rotten Tomatoes 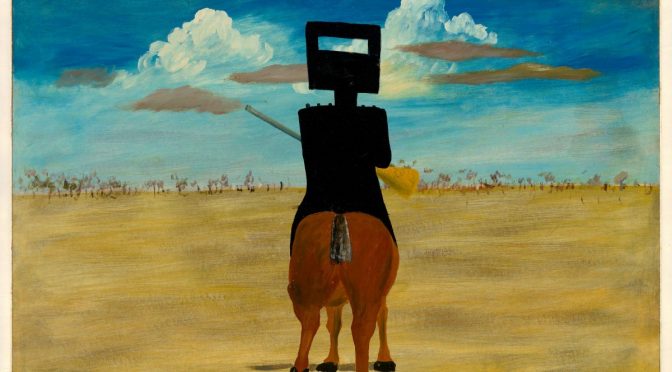 Every now and then, our most popular folk hero is taken out of storage, dusted down and given new clothes. This year saw the release of Justin Kurzel’s The True History of the Kelly Gang, and it marks the 50th anniversary of Tony Richardson’s Ned Kelly with rock legend Mick Jagger in the lead.

Intriguing. While his story in other media has been well received, the Ned Kelly films have struggled

Both of these titles are currently streaming on STAN, and are very different takes on a young bushranger of Irish stock who was either a class warrior and proto-republican, or a lowly horse thief. You can take your pick. 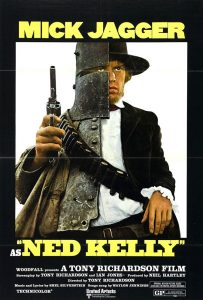 Many interpretations have tended to have a bet both ways. Hardly a homage, Peter Carey’s wonderful, prize-winning book that Kurzel’s film is inspired by was wildly successful, and artist Sidney Nolan’s Ned Kelly series from the 1940s have become canonical works.

It is intriguing that, while stories of Ned in other media have been very well received, the Ned Kelly films have struggled. Since Jagger did his turn in 1970, the part of Kelly has been played by two fine actors. In 2003, Heath Ledger had the main role in Ned Kelly, directed by Gregor Jordan. George MacKay has played him in Kurzel’s recent film.

The film medium is, unfortunately, demanding and exacting in its particular way, and from the first moments in the Tony Richardson film, there is obviously something missing. It opens on Kelly in prison, on his way to the gallows where he utters his famous parting words, ‘Such is life’.

It isn’t just the moustache that’s missing, it’s physical presence. In his chinstrap beard, Jagger looks more like a member of the Amish than the swashbuckling outlaw whose manly image in full beard we are accustomed to.

Is this the Rolling Stones frontman? The film didn’t reflect well on his day job either

More than this, it’s his flat, uncertain voice trying to project and the wavering accent. He tries whatever he can manage – Cockney, Australian, Irish – and the pub singalong featuring The Wild Colonial Boy is only faintly rousing. Is this the charismatic outlaw, a man of the people, who we are invited to celebrate?

Is this the Rolling Stones’ frontman? The film didn’t reflect well on his day job either. 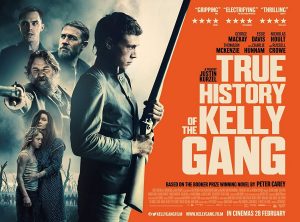 Any Ned Kelly films needs a robust central performance. The lack of a compelling central presence in Kurzel’s The True History of the Kelly Gang is a weakness there to, and significantly subverted by having the male actors so frequently crossdress.

Serious shortcomings aside, the script, which was the work of director Richardson and local Kelly expert, the late Ian Jones, is packed with characters among the downtrodden Irish, and with incident. The sense of community is strong, especially compared with the bleak Kurzel version of a family isolated and vulnerable.

When there are more characters in the frame, and attention is not directed solely at Mick Jagger’s Ned, the film comes alive with the jauntiness that Richardson could do so well. The rollicking tone that dominated one of his most famous films, Tom Jones, is in the ascendant. If I turn a blind eye to the lead actor, this is what the film does best.

The ravishing location shots by cinematographer, Gerry Fisher, are another plus. They capture the individual character of the Australian bush and rural landscapes in their many moods. As many Canberrans know, Ned Kelly of 1970 was made in and around Braidwood in the Southern Tablelands.

Just a hint of homoerotica is implied when Kelly accepts a drink from Constable Fitzpatrick (the late Martyn Sanderson) at the pub. I also recall a brief scene of a man in a dress riding a horse, but nothing like the liberties taken in Kurzel’s film. 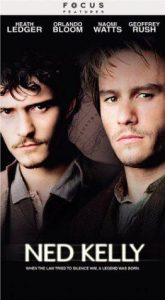 Mick Jagger has flirted with many things, including an acting career. He beat Ian McKellen for the part of Kelly but this performance probably buried any further ambition to act in feature films.

In 1970 the Australian film industry was on the cusp of a revival that would see classics later in the decade like Picnic at Hanging Rock, My Brilliant Career and Mad Max. Bilateral government support for subsidising a local industry was nearly, but not quite, there.

Richardson’s Ned Kelly was a big budget international coproduction that swept into town and made off with generous Federal Government funding. For this and other reasons, it was not received well. On the up side, it did at least convince Australian filmmaker Michael Thornhill and his contemporaries that they could do a lot better.

First published in the Canberra Times on 5 April 2020. Also broadcast on ArtSound FM 92.7