Caroline Vignal hiking in the Cevennes 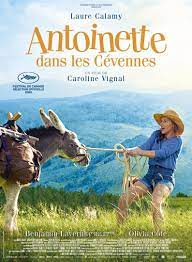 Comedy has hit refresh with a new fish-out-of-water comedy from France, Antoinette dans les Cevennes. That lovely expression, fish-out-of-water, is exactly the same in French. At least England and France agree on something.

Antoinette dans les Cevennes has an irresistible lead performance from Laure Calamy as the impulsive 40-something, primary school teacher who follows her married lover on his family hiking holiday.

Last year in France, where it is known as My Donkey, My Lover and I, it reached the top of the box office when cinemas were open after lockdown.

To say Antoinette (Calamy, from Call My Agent) is unprepared for the experience of tramping through the great outdoors is an understatement. She has packed short denim shorts, clingy tops, miniskirts, and wedge sandals in her hot pink suitcase and has to trundle her things around without a backpack. The bright red and pink fashion combos suit her so well, but they look out of place among the other randonneurs, the other serious hikers on Stevenson Trail.

We laugh and yet we adore Antoinette.

As Antoinette, Calamy is effervescent and irrepressible. In my phone hook-up with Caroline Vignal this week, the film’s writer-director said, ‘Laure brought her own nature, her personality, her energy, her improvisations with a few phrases. As a very good actor, she brought a part of herself to the character, that she incarnated.’

Calamy has just won a best actor award for her interpretation of Antoinette, at the French Cesars. Her effusive Antoinette, the schoolteacher in love with the father of one of her students, will surely be a long-standing favourite among movie-goers.

Antoinette’s behaviour verges, I suggest to Vignal, on the ridiculous. Charmingly. The scenes in which she leads her fifth form students in a performance of the sensual Veronique Sanson love song ‘Amoureuse’ in a performance for parents, are delicious and very funny. The song is, of course, meant for one member of the audience in particular, Vladimir (Benjamin Lavernhe), her lover. Inappropriate, but we love her still.

Vilnal agrees that Antoinette dans les Cevennes steers away from comedy of cringe.

‘Antoinette doesn’t want people to sneer at her. It’s important that people like her, it’s very important for her. Even though there is the moral challenge of her running off with the father of one of her students, I didn’t want any of the characters to be left out of the general goodwill.’

What do you think are the elements of good comedy? ‘Wow, oh la la! What a question.’

‘I think the really good comedies speak of something profound. What is important for me is that comedy speaks truly of deep things, of painful things, because laughing enables us to get over them.’

The inspiration for the film came to Vignal ten years ago when she was hiking in the Cevennes in southern France. She is an experienced hiker.

She took the route that the Scottish author Robert Louis Stevenson, author of Treasure Island, Dr Jekyll and Mr Hyde, took when he hiked there. He travelled alone through the region over 12 days, with only his donkey, Modestine, for support and company.

Vignal has done the same hike, and she has read the book Stevenson wrote, Travels with a Donkey in the Cevennes. It was published in 1879 and is still in print today.

There’s something inherently humorous about donkeys, is that fair?

‘But I did it without a donkey! No donkey.’

As a totally inexperienced hiker, Antoinette is allocated a donkey to carry her possessions, of which there are many. Patrick is as recalcitrant as one might expect a donkey to be, but he and Antoinette eventually reach an accommodation.

I suggest that there is something inherently humorous about donkeys. Is that fair?

‘Well, I didn’t want the donkey to be seen as a comic character, but the relationship with the donkey was like a romantic situation. At the beginning they hated each other, but along the walk they learned to get along with each other before, of course, the rupture at the end.’

Antoinette finds new companionship with Patrick that allows her to free herself from obsessing over Vlad. She wanted to be with him, but ended up alone. In solitude, and found herself again.

As explained in the film, Stevenson had set out on the hike to get over a love affair. He had fallen for an older woman, an American, who was married with children.

So the Cevennes is full of hikers trying to recover from love affairs that haven’t worked out?

‘There are some people carrying the scars of failed relationships. Some who see others and say my god, that was me last year. But the majority of people are actually genuine walkers and hikers.’

As our discussion changes tack, I ask about casting the talent. How did the actor Laure Calamy come to be the lead?

‘Laure was my first choice but my producers suggested a better known female actor. Luckily that actor turned down the role and I had to go with Laure!’

Well, what a stroke of luck!

First published in the Canberra Times on 3 April 2021